Negotiating an Injury Claim VS. Filing A Personal Injury Lawsuit

Accidents happen, and they often occur without notice and warning. Some victims are involved in car accidents, injured in medical malpractice mistakes, bit by a dog, or slipped and fell in a store. Whatever the case, injury victims are legally entitled to financial compensation for their losses and sustained injuries.

After suffering an injury, many questions arise about an accident. Do questions arise such as: Who is liable for the accident? How will medical expenses and time off work be covered? Who is responsible for property damage? And most importantly how and who should handle my injury case? 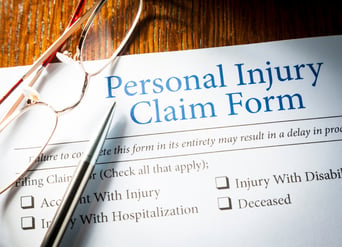 While these are all important items to be addressed; understanding the differences between an injury claim and a personal injury lawsuit will help all the other pieces fall into place. It's crucial to have basic knowledge of both a claim and a lawsuit to grasp your legal options moving forward in handling your injury case.

The Basics After an Injury

Typically, when someone has a personal injury claim, usually an insurance claim will be filed before filing a lawsuit. After an accident, typically someone’s insurance coverage whether that of the injured person or the person responsible for the crash- will apply to the situation. And in that case, there is a good chance that the injured person’s medical bills and other losses originating from the accident will be fully paid out for that coverage, up to the dollar limits of that policy.

Before a lawsuit has filed a settlement can be reached through negotiations less than 5% of personal injury claims go to trial. If a fair settlement cannot be achieved at any point, then the case will reach trial, and the jury will decide whether the defendant is responsible for the plaintiff’s accident, and if so, how much to award the plaintiff. Let’s look at some differences between court-based personal injury lawsuits and injury-related claims, and what to weigh when evaluating your case.

The required amount of insurance coverage differs by state; that’s why it is important to seek legal counsel from an attorney that is knowledgeable with your state’s laws and regulations. Additionally, insurance companies may be required to offer “uninsured driver” coverage in case a person is hit by an uninsured driver. 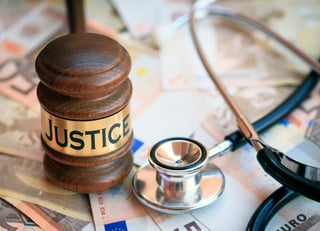 If a physician makes a mistake during a procedure, the patient may file a claim through the doctor’s medical malpractice coverage. Likewise, if a customer slips and falls in a store, he or she may file a claim with the store owner’s insurance company.

When Does a Claim Begin?

A claim begins after a victim is injured or suffers property damage caused by another driver's negligence. To cover the victim's costs, the victim pursues the at-fault driver who turns the matter over to his insurance company. Once the insurance company is notified it generates a claim number and assigns the case to a claims adjuster, then the adjuster opens a claim and contacts the victim to negotiate a settlement, if the two can agree on a settlement a lawsuit will not have to be filed.

The required amount of insurance coverage differs by state; that’s why it is important to seek legal counsel from an attorney that is knowledgeable with your state’s laws and regulations. Additionally, insurance companies may be required to offer “uninsured driver” coverage in case a person is hit by an uninsured driver.

If a physician makes a mistake during a procedure, the patient may file a claim through the doctor’s medical malpractice coverage. Likewise, if a customer slips and falls in a store, he or she may file a claim with the store owner’s insurance company.

Once an insurance company is informed of the claim, an insurance adjuster will be assigned to the claim. The claims adjuster will be in charge of negotiating a settlement with the injured. Keep in mind, the adjuster’s objective is to offer the lowest settlement possible, so don’t jump at the first amount offered. At the same time, the insurer will do everything it can to resolve the claim before it goes to court, putting the case in the hands of an unpredictable jury could allow the plaintiff to be awarded hundreds of thousands of dollars.

Before an insurance adjuster discloses an offer, he or she will look for:

To get this proof, the adjuster will investigate the facts of the case.

The Insurance adjuster will be looking for all elements that point to the fault. He or she will also inspect anything showing the injuries required medical attention, which contributed to significant medical costs to treat the wound, out-of-pocket costs related to the accident, inability to work or earn because of the injuries continued from the accident.

Your conversation with the claims adjuster needs to be accurate and support your case. During the claims process, you must convince the adjuster of the following:

After the investigation is over the insurance claims adjuster will make an offer. The decision can range from paying the entire amount of your demands to paying nothing. The adjuster's response is somewhere in between. If you come to an agreement, the adjuster will send you a check and a release form. Once you sign the release and cash the check, your claim is finished and final.

If a settlement cannot be agreed on, it would be at this time the injured party may wish to file a personal injury lawsuit. Although you may submit a lawsuit at any time during negotiations, once you accept a settlement, you also relinquish your rights to go back and file an injury suit.

A personal injury lawsuit happens when negotiations break down, and a compromise cannot be reached. The collapse may occur because the claims adjuster denies their insured was at fault, or doesn't agree with the severity of your injuries in the amount you're demanding. When claim negotiations hit a wall, the next step is a lawsuit.

A personal injury lawsuit starts when the injured person (plaintiff) files an initial complaint and summons (document notifying the "defendant" that they are being sued) with the local branch of their state's civil court. These documents are "served" on the accused, who has a certain number of days to respond.

Filing a lawsuit may take more time to resolve, but depending on the circumstances of your accident it may be well worth the wait. Taking your case to trial increases your chances of receiving a higher dollar value through a jury award. Going to trial may also give you a better chance of recovering all of your out of pocket costs. Also, you may be able to win an award for pain and suffering and even punitive damages.

What Injuries Are Substantial Enough to File a Lawsuit?

Threshold injuries are far-reaching injuries. To fall in this category, the injury must have caused significant damage and either be permanent or limit the person's ability to do normal daily activities for a given period. Many states used what's referred to as a Threshold Injury Doctrine if you are injured in a car accident and fail to meet the threshold your case could be dismissed. Although the various states define the threshold differently, some are common to all and those limit injuries include:

Make the decision carefully to file a suit; you don't want to file a suit then have it summarily dismissed. Regardless it's always a good idea to speak with an experienced personal injury attorney for legal advice and the best options outlining your case.


However, there are substantial expenses that come along with filing a lawsuit, though every injury case will vary in costs and attorney fees, the decision to pursue a trial is ultimately the clients. 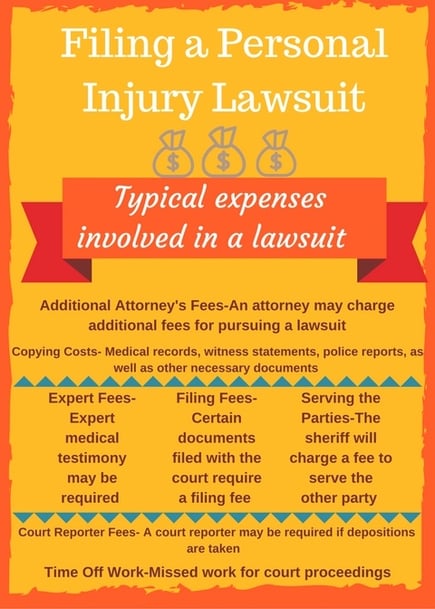 Arbitration an Alternative to a Trial Suit

Arbitration and mediation are also two options to consider during a lawsuit before a final judgment is reached, the parties opt for a private dispute resolution procedure instead of going to court.

Arbitration can take place after settlement negotiations fail but before filing a lawsuit. It's like going to court without actually going to court. In Arbitration, both sides agree on a third party called an "Arbiter," who listens to both sides and decides the outcome. In most cases, once the arbiter makes the decision it can not be appealed.

Benefits of Arbitration Compared to Lawsuits

Contact our Accident Injury Law Firm for legal direction in filing your injury case. Whether you are planning negotiations with an insurance company or going to trial before a jury, our experienced and qualified Georgia personal injury lawyers will advocate on your behalf throughout the duration of your case, contact us today.