Opioids are natural or synthetic chemicals that bind to the receptors in your brain or body. Common opioids include heroin and prescription drugs such as oxycodone, hydrocodone, and fentanyl.

These dangerous prescription drugs are destroying families and taking lives across the nation. But how did these hazardous medications spread so quickly and violently? Most fingers are being pointed at pharmaceutical companies and doctors, continuously over prescribing and pushing sales onto medical facilities. 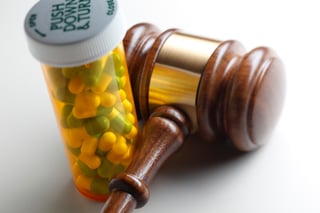 The Spread of Prescription Opioids

Prescription opioid overdose is an epidemic affecting millions of American:

Drug manufacturers say they sympathize the addiction and fatality problems associated with their products, but they also demonstrate resisting efforts to seize production levels, suggesting to do so would mean taking away relief from people in pain.

Sources have found pharmaceutical companies teaming up with physicians across the country to aggressively push these harmful narcotics onto patients. These trusted medical facilities were putting profits before patients as they made millions off the pain while fueling opioid addictions.

For example, The pharmaceutical company Insys Therapeutics distributes the drug-Subsys Fentanyl, a painkiller delivered as an oral spray-recent investigations found Fentanyl was being pushed onto patients and prescribed for unintended uses. This high costing and extremely potent product raked in a profit of $148.4 million in total revenue, quickly becoming a continuous cash machine for the pharmaceutical companies.

How these particular drugs were introduced and why the recent surge?

It's shocking  Americans are 5 percent of the world’s population, but we consume virtually all of the hydrocodone products like Vicodin and huge percentages of the oxycodone.

Why is the United States consuming such a high level of opioids compared to the rest of the world?

The answer points again to marketing strategies; pharmaceutical practices aggressively brought on sales reps to persuade doctors with financial and other incentives to prescribe OxyContin and other opioids-there was also a plan designed to target the public, where a national network of pain foundations was created. What exactly did these pain foundations consist of?

Purdue Pharma funded more than 20,000 pain-related education programs, almost ten a day, seven days a week. With more than 40 national pain-management training conferences conducted, located in vacation spots, such as Boca Raton and Scottsdale, paying for more than    5,000 physicians to attend. Also, specialty centers were funded and created along with academics for pain sciences-that would give doctors materials and prescribing guidelines to encourage the use of OxyContin and other opioids.

CDC Map of Most Prescribed States 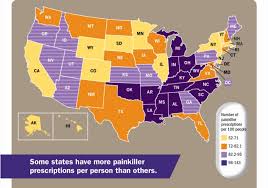 And for certain areas of the country, they even created specialized regional pain foundations that would market the drug. For example, CDC found Alabama, Tennessee, and West Virginia in particular-had the most pain killer prescriptions per person. Interestingly, Purdue Pharma founded the Appalachian Pain Foundation, based in West Virginia, where they arranged and held meetings congregating the sales and marketing of dangerous opioids.

The result? West Virginia quickly became one of the highest opioid prescribed states in the country with the most addictions and opioid abuse.

When more information became "leaked," and officials started challenging the tactics and strategies of drug producers and opioids. Questions arose as to why people were misinformed of opioids and their harmful affects? And why were production levels remained so high? Drug manufacturers responded with:

The CDC produces government endorsed guidelines in attempt to regulate prescription drug sales and manufactuering. Finally completed in March 2016, the updated guidelines declares doctors should not prescribe high dosages of opioids as the first choice, anything from ibuprofen to other kinds of pain-management therapies should be tried first, and then, if that isn’t a solution the high-dosed opioids might be acceptable. And these are only voluntary guidelines.

While these guidelines were a strive in the right direction, they were no where near the steps necessary to take down opioid addictions and deaths occurring daily. Why did efforts seem to be attenuated by policy makers?

A number of Pharma-funded groups attacked the CDC and threatened them with investigations and legal actions over the guidelines. Policy makers and members of the CDC were pressured to water down the guidelines.

While the legislation does nothing to limit the over-prescribing of opioids, we might in fact actually took a step backwards, because there is the provision in the bill that allows a new division of the industry and stakeholders in the reviewing process of the CDC guidelines. So there is actually potential in the future for the industry to take a second shot at the CDC guidelines they were so initially concerned about.

Pharma-funded groups and organizations include:

Legislators deal with Opioid Crisis in hopes of Reelection

Many of the Senators up for election are from the Northeast Area, which is a region that has been heavily affected by the opioid and heroin epidemic. These legislators persistent on taking something to the voters, by announcing they have dealt with the opioid crisis, fixing the problem.

But after supposedly addressing the opioid problem, the big picture provides some money and incentives for drug treatment of addiction, and for higher supply in Narcan, which is an overdose drug that helps revive someone who’s has overdosed off an opioid. While these are positive steps in reforming prescription drug abuse, there is again nothing the legislation does to buckle down on pharmaceutical companies and hold them accountable for over-prescribing of opioids.

While pain foundations try to repeal guidelines and restrictions against prescription drug opioids there new plan of attack is to become formulated within the input of the industry. They have been trying to add more commissioners and advisors to the board that are representatives from pharma-funded groups. Hoping by having more of a stake in the process of creating rules, they can weaken them or make them effectively useless in a procedural way.

It seems the opioid industry has gained much influence by buying off the anti-drug and pain-foundation world, which reinforces the power of money and far people will go to gain a buck.

If you or a loved one has been injured or even suffered a death due to opioid prescription drugs, contact the Georgia Medical Malpractice Lawyers.

While the fight continues with these dangerous medications, you don't have to suffer alone, and you rightfully deserve justice for your losses. We will evaluate your case free of charge, and can inform you of your legal options should you choose to pursue a lawsuit. Drug manufacturers, health care providers, hospitals, and nurses can all be held liable for your injuries; we will determine all guilty parties and hold them accountable. Please contact our prescription drug error attorney's today for help.

Our Prescription Drug Error Attorneys have years of experience and are looking to help you. Click Below to speak with one of our Attorneys Today!