Can You File A Slip and Fall Claim On Government Property?

Ever wondered about filing an injury claim after a slip and fall on government property?

If you have ever slipped and fallen in public, initially you look around with an awkward stare, hoping no one within sight just witnessed your embarrassing tumble.

However, in some cases, these injuries can be severe leaving victims in astonishing pain and with costly medical bills. However, many people don’t realize their accidental fall could have been prevented, and they may be able to hold the property owner responsible for their injuries.

None the less, there are strict limitations for lawsuits brought against the governmental properties.

The statutes for filing a “slip and fall,” case on government property are very short and can only be filed after the responsible government agency has been notified in writing of their injuries. Besides, the federal government places a cap on how much you can recover from the state or a municipality if you win.

The federal government and most states have specific rules that you need to follow in slip and fall cases against the government. You must file a proper notice of injury with the correct government entity, in which different states may have different notice requirements. If you fail to file your claim within the designated time period, which can be as short as 30 days, you may lose your rights to file altogether.

You Must Send Notice to the Proper Governmental Entity

It is critical that you send notice to the correct office. If you accidently send your injury claim to the wrong governmental office, even though it may be in the same proximity or building, your claim may be excluded altogether. Plus, you have to make sure that you make your claim against the proper governmental entity in the first place.

For example, let’s say you fell on uneven pavement in front of a federal government building. 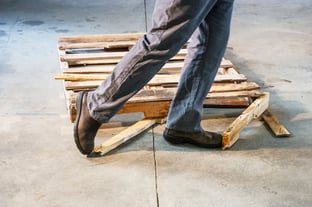 You incorrectly conclude the city owns the sidewalk, and so you give notice to the city and only the city. But the federal law established a binding contract between the federal government and the city for the use of the building, making the sidewalk ownership of the government, not the city.

So in this case, the city would not be liable. If you fail to give notice to the proper division of government within the proper time frame, your claim won’t be considered and discarded.

These limits will vary, depending on which government entity you are suing, but they can be as low as $100,000. You can obtain “specific damages” such as medical bills, rehabilitation costs, and lost wages, but the government is typically immune from “general damages,” including pain, suffering, and loss of enjoyment of life.

If you have been injured in slip and fall accident, whether on government property or anyone' property, you should contact an experienced Slip and Fall Lawyer in Georgia to represent your case.

Since it becomes the burden of the injured claimant to prove their injuries against the responsible negligent party, hiring a lawyer that is well-versed on the premises!e liability laws can strongly help your case.

Our Georgia personal injury law firm will work passionately and diligently to protect their client's rights and to gain the maximum compensation deserved after their pain and suffering. Contact a Slip and Fall Injury Lawyer today and get the best litigation team on your side today!